After weeks of speculation, musician Sjava has confirmed that he has parted ways with record label Ambitiouz Entertainment.

On Tuesday afternoon, Sjava announced in a statement posted on Twitter that he is no longer with the label he has released three albums and won several awards under.

“I will forever be grateful for everything that they have done by giving me an opportunity and platform when no one did nanokuthi through them ngikwazile nokwakhela umama umuzi ekhaya,” read the statement.

Sjava in his statement mentioned they he will be forever grateful to the label for the opportunity and respects all the artists signed to the label and also ex-members and producers.

The award-winning musician also emphasized that he has no problems with anyone and he has always chosen to remain silent as he is not a person of beef.

Earlier this month a report by The Sowetan alleged that the uMama hitmaker s “extremely unhappy” with Ambitiouz records and is looking for an out. Label owner Kgosi Mahumapelo at the time said that Sjava is still signed to the label and will be for years due to the airtight contract he signed.

“An artist or label cannot opt to renew a contract that is still active and will be for a few years to come. All three contracts are active and Ambitiouz have not requested the artist to renew any,”

Sjava in his statement explained that he took a back seat from the limelight as he wanted to deal with the whole process with respect and dignity as he has learnt to be professional and not taking things personally in the business is important.

“The reason for partying ways iyaziwa yimana and the label for now and I hope that this process of parting will be done in a way that reflects mutual respect. That is my hope,” said Sjava.

The musician also asked his fans to continue to love and respect what he does as they have been doing so and also asked that after this statement his fans not attack his former label or anyone else no matter what is said about him.

Read his full statement below 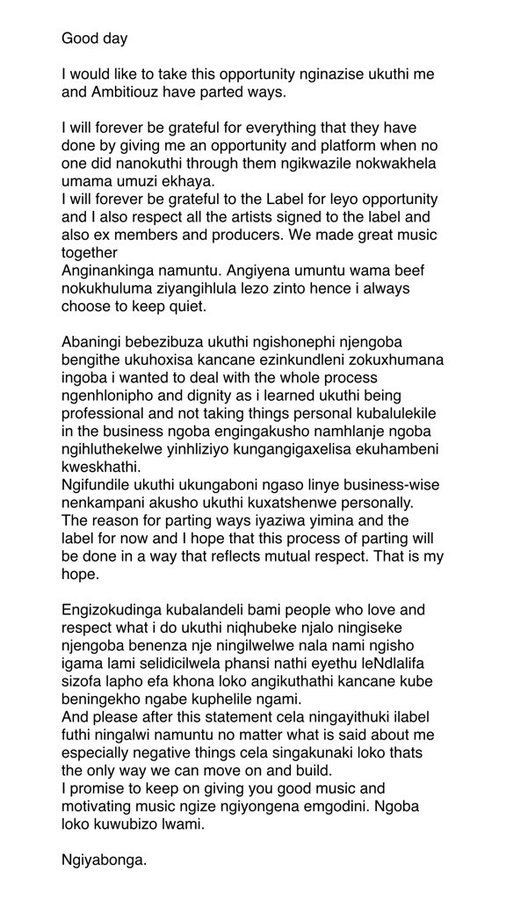 Ever since Lady Zamar’s rape accusations Sjava has been under the radar for a while. Well he is back and at the very top of his list of things to sort out is his alleged sour relationship with Ambitiouz Records.

According to the Sowetan the uMama hitmaker is “extremely unhappy” with Ambitiouz records and is looking for an out. He also needs Ambitouz to run him his Black Panther money.

However, when the Sowetan talked to the label owner Kgosi Mahumapelo, he said Sjava is still very much under the label and will be for years to come because of the airtight contract he signed.

“An artist or label cannot opt to renew a contract that is still active and will be for a few years to come. All three contracts are active and Ambitiouz has not requested the artist to renew any,”

Sjava himself last year had also expressed unhappiness on a now-deleted Twitter thread but unfortunately, he has to stay because he is bound by contractual agreement to drop two albums with Ambitiouz before he leaves.

A few months ago Sjava re-released his EP Umphako under Next Level Entertainment. He had previously released it under Ambitiouz Entertainment. So maybe the writing is on the wall.

We don’t blame him as so many other artists have left Ambitiouz Records claiming mismanagement among other things. Sjava’s former stable mates Amanda Black, Priddy Ugly, Fifi Cooper, Saudi, A Reece and most recently Emtee have dumped the label.

Big Tigger Announced BET “Rap City” Is Coming Back, Says ‘This Is Not A Drill’

© editor@dailyscoopmg.com
We use cookies on our website to give you the most relevant experience by remembering your preferences and repeat visits. By clicking “Accept All”, you consent to the use of ALL the cookies. However, you may visit "Cookie Settings" to provide a controlled consent.
Cookie SettingsAccept All
Manage consent