Rapper Femi One has expressed discontentment over frustrations subjected to creatives who toil day and night to make ends meet but their sweat end up in the wrong hands.

The Utawezana maker said that many talented Youth continue to suffer simply because those entrusted to handle their cash have become self-centered and no longer represent artistes.

Femi One’s public outcry comes a time the Kenya Copyright Board (KECOBO) is demanding DJs to acquire licenses before they are allowed to live streams their sessions on all streaming platforms.

Anyone who violates the exclusive rights of the copyright owner is an infringer of that copyright. When a DJ creates a live stream and starts broadcasting music to the Internet, he has become a radio station. He needs licences from copyright owners or CMO” shared KECOBO. 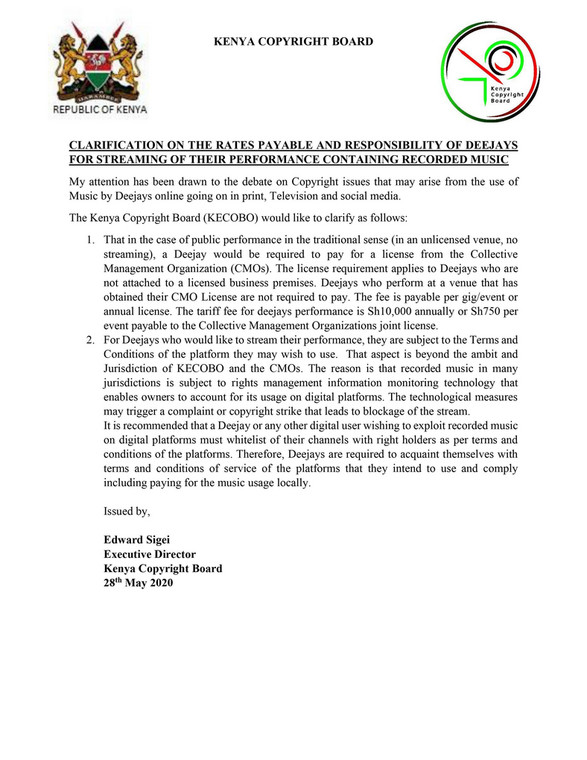 A Body like the Music Copyright Society of Kenya (MCSK) has always been on the spot over distribution of royalties to its members. Last year a good number of artistes were unhappy with MCSK after receiving Sh2,530 from the Collective Management Organisation (CMO) in the name of name of royalties.

Popular rapper Femi One, is beaming with pride as the music video for her hit song Utawezana, has reached 5 million views on YouTube. The musician took to Instagram to celebrate her achievement.

Femi asked her fans if she can release another one and many have approved. Some of her fans said she must acknowledge Azziad, who released a Tik Tok video which went viral on social media dancing to the song.

The video captured the hearts of many and some knew her song through the video.

Finally!! We are at 5million views …we can now release another one Yes?!

The singer slammed those who said she must pay Azziad, and said her song was already big at that time Azziad did her video. Despite the negative vibes, Femi One’ fans congratulated her on the achievement and said she must definitely release another song.

In Other Stories…Meet Azziad Nasenya the Kenyan Tik Tok Queen

Unless you’ve been living under a rock, I’m sure you’ve heard of the name Azziad Nasenya, such a lovely name right? Anyway, sorry for digressing.

50 Cent Wants Nicki Minaj To Star With Him In A...

October 1, 2021
© editor@dailyscoopmg.com
We use cookies on our website to give you the most relevant experience by remembering your preferences and repeat visits. By clicking “Accept All”, you consent to the use of ALL the cookies. However, you may visit "Cookie Settings" to provide a controlled consent.
Cookie SettingsAccept All
Manage consent